As you can see here, the room that David was going to move into had significant problems. There is no insulation inside our brick and block constructed walls, and there’s a thin layer of plaster on the surface that causes some excessive flaking when a nail pops out. When we tried to paint David’s room, we were confronted with the fact that most of our new paint would fall off of the wall which was severely flaking in several places. In particular, the damage was worst on the wall that touched the external surface, where the temperature gradient was the highest.

So about a week before David was born, we found out we had to do a bit more than your standard normal paint job, and to tackle this one quickly. The first thing we did was to scrape down walls with a putty knife. Not trying to find/create new problems, but to remove any loose or flaky areas. To our great surprise, the majority of the wall touching the external side of the house almost completely flaked off. Besides this, there were a number of nail pops as well as several regions where the wall had completely disintegrated.

In order to fix this, I had to do some pretty serious surface preparation of the existing walls. Instead of just scraping, I found it very useful to use a random orbital sander with 70 grit sandpaper. This removed all of the very loose material on the paper surface of the wall and enabled me to remove any loose material around the nail popped areas as well. Moreover, there were several areas where the settling of the house had caused cracks, especially around the window and doors. Here, I found it very useful to take a utility knife and remove a good section of the crack to remove any loose gypsum and completely start over with solid surfaces. I also put in about 50 screws to hold on the drywall and used a nail set to drive in each wayward nail. After this, I used a mesh adhesive tape to cover up cracks and provide transitions where needed.

With the walls ready for a surface coat we decided to coat the walls and ceiling with joint compound. In order to do this, a friend of mine, Tim Petrie, significantly watered down two large buckets of joint compound and proceeded to coat the entire room. After this I sanded and applied several more coats and areas that needed significant help. You can see the results below.

Naturally, this was a very dusty, dirty, process and the cleanup involved a significant amount of work. Chrissy couldn’t resist a quick photo to capture my misery. 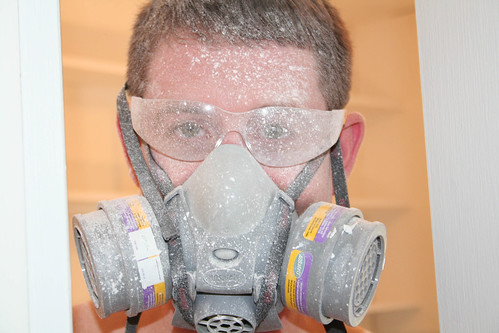 The most important part of the cleanup process was removing all dust from walls. We did this by using a shop vac (with a bag instead of a filter) to get any loose dust out of the room, then migrated to cheesecloth, and finally used some very mildly damp rags and wiped down the walls.

After this, we applied a solid layer of Benjamin Moore’s acrylic primer through the entire room. We found the primer worked excellently, however the fumes were pretty strong and Chrissy had to step aside. After allowing a day for everything to dry, we finished with the final two coats on the walls of restoration hardware paint.

We finished two days before the baby was born, much to our relief. We call that just-in-time production. 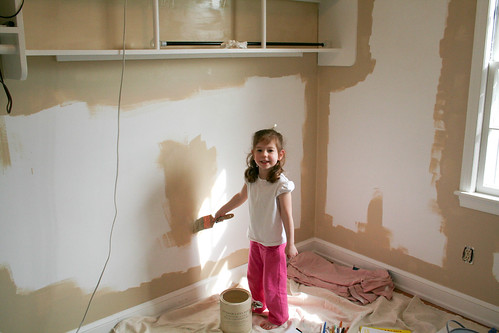 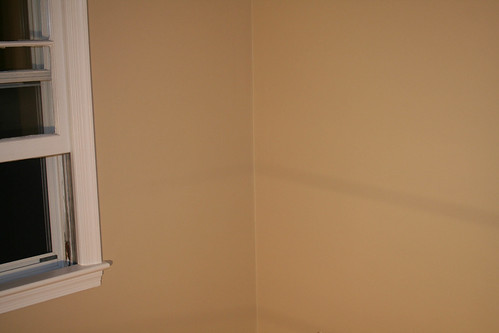 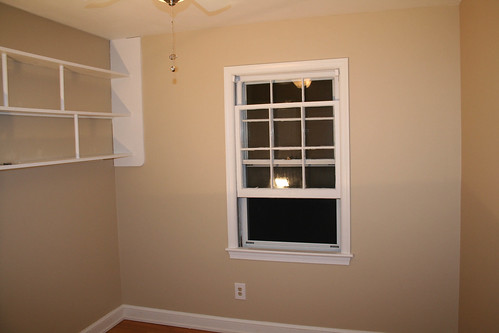 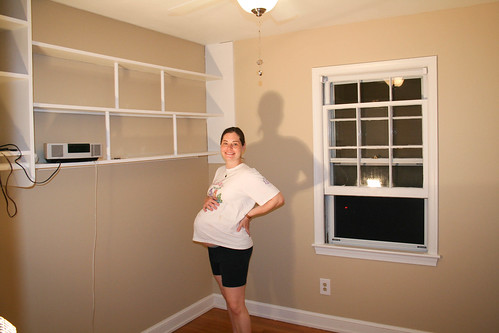