During a recent CrossFit competition, flex on the mall, we had to accomplish a team chipper in which we were able to pick the order of team members in order to minimize our workout time. The workout was simple: 50 burpees, 40 over the box jumps, and 30 kettle-bell snatches. Each exercise had to be accomplished in serial: no one could start an exercise until their previous team member had finished. This meant everyone waited while the first person started. As simple as this was, I got confused when figuring the optimal order for team members: should the slowest go first or last?

At the time, I thought the best strategy would be to have the fastest go first, to prevent the scenario where the fast folks were waiting and unable to help the team. I was focused on the idea that you didn’t want anyone to be waiting — so clear out the fast people first. My partners wanted the slowest to go first because the slower participants could rest, go super slow and not affect the final score.

While I was wrong, and they were correct, this didn’t make sense at the time, because I was viewing the whole thing as a linear operation where order didn’t matter, but waiting on someone would definitely slow down the overall time. It turns out that if you put the slowest last, no one is waiting, but the clock is rising totally based upon the slowest time, when you otherwise could have obscured their slow time. The workout came down to the following critical path: the time it took to do everyone’s burpees plus the last participant’s time.

However, this is only true if the time it took to do burpees was significantly more than the other events and there was not a significant difference in fitness between team members. After the competition, I wanted to understand the dynamics of this workout and build a quick model to understand where these assumptions held true and hone my intuition for stuff like this.

It turns out the worst thing to do is have the slowest person go last. The reason why is really simple: you are putting them in the critical path. In fact, an optimal strategy is to have the slowest always go first. If I assume all four members have different speeds, and made an assumption like this based on expected values of their workout times. Let’s assume four members have the following expected completion times (in notional units), where person 1 was the fastest and each successive participant was slower in all events.

Note: These are totally made up numbers and have nothing to do with our team . . . says the man whose wife now routinely kicks his scores to the curb.

This is such a simple event that you can see the basic building blocks without much introspection: 21 is the fastest time to complete the sequence and 45 is the slowest. If the team were all comprised of person 1 they could complete the whole thing in 48. As this fictional team is, burpees alone will account for 51 regardless of order, but if the fastest goes at the end, you can get away with only adding 15 on to the total time, versus adding 28 if the slowest person goes last.

Several things here. It is so simple to work the math of this with variables instead it probably should be done. A better analysis could show you how much variation you could tolerate between athletes before the problem dynamics above don’t apply. Maybe another lunch break for that.

OK, on some more thought, I thought I would look at several scenarios and show optimal strategies.

A team member is much slower on burpees, but faster on the other events.

In this case, it still makes sense for her to go last. The burpees are linear, but speed in the bottom two events determines the order. It helps me to assign a color to each team member and see all 24 strategies on one plot. The lightest shade is member one who has a burpee time of 40 compared to 4 for the others, but is faster in the other two events than the others. In the plot below, the fastest combinations are at the top where you can see that all the fastest outcomes have member one going last.

So if their event times look like this where everyone’s KB snatch times equal their burpee times. 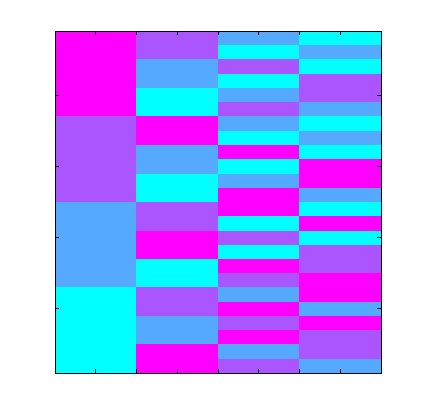 My code is below for any of those interested.

One Reply to “FlexEvents: WOD 3 Simulation”