Humanity is now entering a period of radical transformation in which technology has the potential to significantly raise the basic standards of living for every man, woman and child on the planet.

The future can be a scary place

It can be easy to develop a gloomy view of the future. Malthus was the first public voice that compared population growth to the world's diminishing resources to arrive at the conclusion that our days were numbered. Jared Diamond has argued well that we are gorging ourselves way past sustainability and flirting with our own collapse. Other books I've read recently to include a Short History of Nearly Everything and Sapiens take a long view of history and produce a masterful explanation that humans dominate the planet and that we are in the midst of an unprecedented experiment with our ecosystem, the world economy and even our own biology.

Add this to the angst in my conservative evangelical community that is beset with rapid culture change1, secularization and nearly complete societal swap of epistemology based on transcendent (i.e. God's) design with a fluid soup of cultural opinion and emotion. But pessimism isn't limited to my crowd, it's practiced well on both sides of the aisle with Jeremiads about income inequality, environmental destruction and corporate power and malfeasance arriving daily from both the Clinton and Sanders camps. 2

Economically, the risks are also very real. The 2008 financial crisis highlighted the systemic risk, addiction to growth and optimistic future projections that are baked into our system. Just as our epistemology now rests on emotion, it seems that our economic theory does as well. It is becoming increasingly difficult to track all of the bubbles and capital mis-allocations that have resulted from 7 years of ZIRP, NIRP and QE. How much more can we print money before the serial, or parallel, and long overdue day of reckoning arrives? In 2008/9, while the equity markets went down, the bond markets compensated. What if next time, there is a concurrent bond market and equity collapse? By some calculations, interest rates are at seven hundred-year lows and a third of Europe is now at negative rates. The high yield market is precarious, and if that falls treasuries will get bid to the stratosphere and at some point you’ve got to get a real return and that is a long way down from the market's current position.

And technology seems to make it all worse. Communication, information and transportation technology pulls us all together into one collective mush that is controlled by the market and state as we all slavishly let world-fashion trends define what we see in the mirror. Everything from the climate to the markets is influenced by a common mass of humanity participating in the same economic dance. What we are left with is an ersatz diversity based on skin-color and political preference, instead of the truly distinct cultures that marked the pre-communication and global transportation revolutions of the last 100 years.

What this perspective misses is that technology has saved our bacon many times and it might just do it again. Mr. Diamandis, the chairman and chief executive of the X Prize Foundation and the founder of more than a dozen high-tech companies, boldly makes the case that the glass is not just half-full, it is about to become much bigger. He makes his case in his latest book: Abundance.

Technology to the rescue

How awesome would it be if technology is about to solve the challenges provided by overpopulation, food, water, energy, education, health care and freedom? If we carefully look back instead of nervously forward, technology has clearly made some amazing contributions. Take one of the most talked-about societal problems that is driving a lot of the progressive tax-policy discussion: income inequality. Here Diamandis discussion of poverty is especially insightful.

If you look at the data, the number of people in the world living in absolute poverty has fallen by more than half since the 1950s. At the current rate of decline it will reach zero by around 2035. Groceries today cost 13 times less than 150 years ago in inflation-adjusted dollars. In short, the standard of living has improved: 95{aaa01f1184b23bc5204459599a780c2efd1a71f819cd2b338cab4b7a2f8e97d4} of Americans now living below the poverty line have not only electricity and running water but also internet access, a refrigerator and a television—luxuries that Andrew Carnegie's millions couldn't have bought at any price a century ago.

You can make other comparisons such as information wealth. I'm eager to plot when the average citizen gained near information parity with the president. (I'm thinking that a basic citizen with an iPhone today has more access to information than George Bush had when he started his presidency.) And who would have dreamed that a family could consolidate their GPS, video camera, library and photo-albums in 112 grams in their pocket?

Through a mix of sunny-side up data and technical explanation, Diamandis makes a good point that a focus on immediate events and bad news and often blinds us to long-term trends and good news. A nice surprise of the book is that he doesn't just preach the technology gospel, but he delves into our cognitive biases bringing in Daniel Kahne­man into the mix and explaining how our modern analytical minds aren't incentivized by see the beautiful wake behind us, but rather focus on the potentially choppy waters ahead. While prudence is always advised, Diamandis makes the case that the resultant pessimism is easy to overstate and can diminish our potential.

Through many historical examples, he makes the point of the massive goodness results when technology transforms a scarce quantity into a plentiful one. One fun example is aluminum. In the Atlantic Sarah Lascow describes that while aluminum is the most common metal in the Earth's crust, it binds tightly to other elements and was consequently very scarce. It wasn't until 1825 that anyone was able to produce even a sample of aluminum, and even that wasn't pure. Napoleon honored guests by setting their table places with aluminum silverware, even over gold. It is a fascinating story that two different chemists3 figured out how to use cryolite—an aluminum compound—in a solution that, when shot through with electricity, would produce pure aluminum. The data show the resultant price drop from \$12 a pound in 1880, to \$4.86 in 1888, to 78 cents in 1893 to, by the 1930s, just 20 cents a pound. And technology leads to more exciting technology in unanticipated ways. In 1903, the Wright Brothers used aluminum to build a lightweight and strong crankcase for their aircraft, which further connected the scientific community around the world to make even more rare things plentiful.

Diamandis certainly plays his hand well and I'm inclined to side with him on many of his arguments. I'll always side with the definite optimists before I join the scoffer's gallery. After all, the pessimists were the cool kids in school, but it is the nerds who get things done. I'm a big believer that engineers are the ultimate creators of all wealth, and here Diamandis is preaching to the choir.

The case for abundance from technology

To summarize his argument, he makes four basic points:

First, we are both individually and collectively terrible at predicting the future, particularly when it comes to technology, which often exceeds our expectations in producing wealth. He claims technologies in computing, energy, medicine and a host of other areas are improving at such an exponential rate that they will soon enable breakthroughs we now barely think possible. Yes, we don't have HAL, jet-packs and our moon-base in 2015, but we do have rapid DNA sequences, an instant collection of the world's information and weapons that can burn up whole cities under a second.

Second, these technologies have empowered do-it-yourself innovators to achieve startling advances — in vehicle engineering, medical care and even synthetic biology — with scant resources and little manpower, so we can stop depending on big corporations or national laboratories.

Third, technology has created a generation of techno-philanthropists (think Bill Gates or Mark Zuckerberg) who are pouring their billions into solving seemingly intractable problems like hunger and disease and not hoarding their wealth robber-baron style.

Fourth, “the rising billion.” These are the world’s poor, who are now (thanks again to technology) able to lessen their burdens in profound ways and start contributing. “For the first time ever,” Diamandis says, “the rising billion will have the remarkable power to identify, solve and implement their own abundance solutions.”

Ok, should we bet the farm on this?

Diamandis is banking on revolutionary changes from technology and from my perspective, expectations are already sky high. (Really, P/E ratios close to 100 for companies like Amazon and Google?) In fairness, by a future of abundance, he doesn't mean luxury, but rather a future that will be "providing all with a life of possibility". While that sounds great, to those of us in the west, this might just be a reversion to the mean from the advances of the last 100 years.

However, I loved the vision he mapped out. Will there be enough food to feed a world population of 20 billion? What about 50 billion? Diamandis tells us about “vertical farms” within cities with the potential to provide vegetables, fruits and proteins to local consumers on a mass scale. Take that Malthus.

While he does a good job of lining up potential technical solutions with major potential problems, he doesn't address what I consider the elephant in the room: are we developing morally in a way that leads us to use technology in a way that will broadly benefit the world? Markets are pretty uncaring instruments, and I would at least like to hear the case that the future's bigger pie will be broadly shared. As it is, I'm pretty unconvinced.

Also, his heroes are presented as pure goodness and their stories are a big hagiographic for my tastes. For example, Dean Kamen's water technology is presented as an imminent leap forward while in reality his technology is widely considered far too expensive for widespread adoption. While he exalts the impact of small groups of driven entrepreneurs, how much can they actually do without big corporations to scale their innovations? In all his case studies, the stories are very well told, but the take-away is not quite convincing against a backdrop of such a strong desire for technology to guide us into a future of global abundance. And even though he acknowledges the magnitude of our global problems; and he hints, in places, at the complexity of overcoming them, he doesn't address that these systems can have negative exponential feedback loops as well. In my view, technology is just an amoral accelerator that requires moral wisdom.

No, but you should read this book anyway 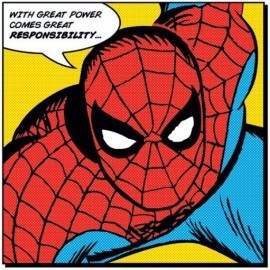 In all, this was a great read and his perspective is interesting, insightful and inspiring. It forces us to at least consider the outcome that the glass half full might actually overfill from technology and that it certainly has in the past. Who can argue against hoping for more “radical breakthroughs for the benefit of humanity.” All considered, this book is a great resource for leaders, technologists and anyone in need of some far too scarce good news.