A three way switch is an electrical component that lets you turn a light on or off from three or more locations. Any one toggle should change the state of the light. To control a light from one location, all you need is a simple on/off switch. The switch either closes the circuit, in which case the light goes on, or it opens the circuit, in which case the light goes off. Essentially, the switch takes two ends of a wire and connects or disconnects them. This is different than a one-switch circuit where the position of the switch correlates with the state of the light. In the examples below, up will mean on, and down will mean off.

First, there are $2^n$ states for $n$ switches. A 4-way switch has three lights or eight states. Mine were wrong. Lauren (my 12 year old) and I measured three switches: 1,2 and 3. Switch 2 was the four-way switch. Our measurements produced:

Two states are off: cases two and eight. They should be closed, but are open.

To think about this more, I was helped by Rick Regan at exploring binary 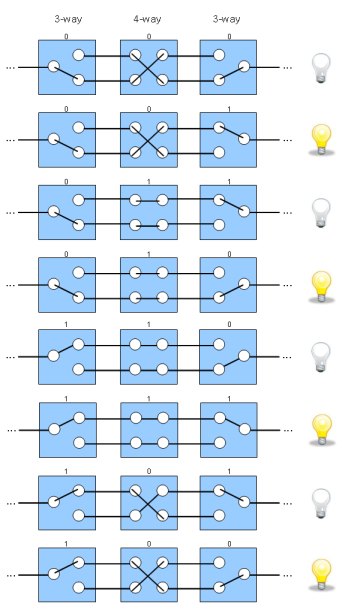 The next piece was to understand how the circuit actually works so I could look at what configuration might be causing the current state machine. This simulation (credit to falstad.com) was awesome.

The key insight was that both failing states should have counted on the four way to close the circuit but the circuit was staying open. With that knowledge, I was able to put the four-way together per the diagram below.

And, for my switches in particular: