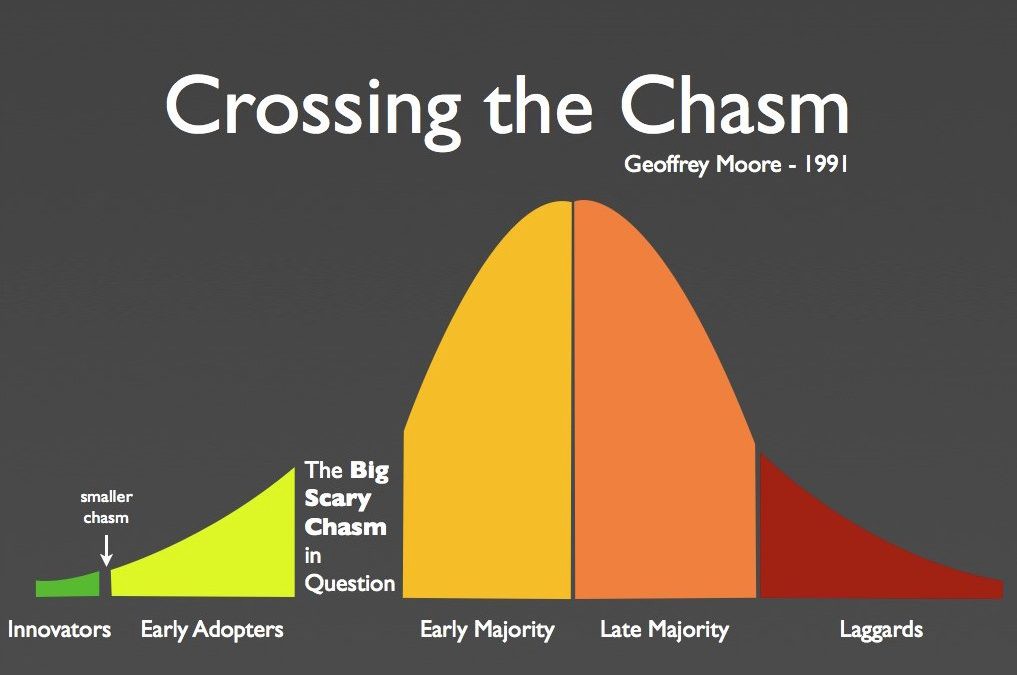 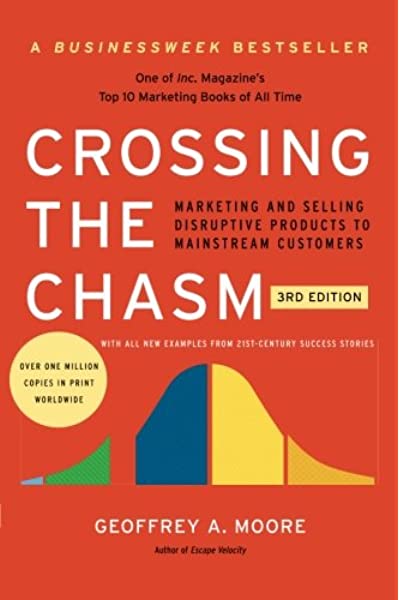 Crossing the Chasm is a marketing book by Geoffrey A. Moore that explores the dynamics of marketing high tech products in early stage startups. While an older book, it continues to be read because the exploration and expansion of the diffusions of innovations model continues to have a significant and lasting impact on high tech entrepreneurship.

I would summarize the book into three main lessons.

Lesson 1: What is the Chasm?

Visionary early adopters start outside the space of the pragmatic majority. To change that, the book explores the technology adoption life cycle and concludes the states that new technology makes its way through the population in a bell curve distribution.

First, Innovators jump on the product, followed by early adopters, the early and late majority, to finally reach the laggards. Specifically, the chasm is the gap that lies between the early adopters and the early majority, when a product is very disruptive and requires behavioral changes.

This is due to differing motivations for buying a product. The visionary early adopters want huge changes and are willing to bet on them against the odds.

People in the early majority are much more pragmatic though. They don’t want big changes and huge innovations, but rather incremental improvements based on using proven products and solutions. But!, most arguments visionaries make to get the majority to buy aren’t appealing.

This dilemma is what Geoffrey Moore calls The Chasm and it’s something all high tech companies must overcome, if they ever want to see their product become successful and reach the majority of the population.

Lesson 2: How is the Chasm Crossed

This book claims that one can only cross the chasm by targeting a specific niche first. To make this happen, you start small.

This also resonated with me in reading Zero to One. Thiel insists that every startup should start small, because it’s easier to dominate a niche market than a larger, pre-existing one. Citing one of his earlier mistakes, Thiel recalls that PayPal initially let users send each other money via PalmPilots–a market that was, ultimately, too large and too spread out for them to control. PayPal then pivoted to work with eBay auctioneers instead, a smaller grouping of a few thousand "PowerSellers" who were easier to reach.

Here, Moore recommends to pick a very targeted and specific niche of customers inside the early majority to focus on and then expand into other niches later on until you cross the critical threshold.

Think of it as first securing a beachhead in an invasion, to take a stand and then build from there.

In order to convince your target segment you’re selling a holistic, well-supported product with good references and establish yourself as the market leader, you have to strictly sell to only your target group.

Don’t expand too early or sell to outsiders, just because you have the chance to. You’ll end up adjusting and customizing your product to death to make it fit for every individual purchase.

One of the best reasons for this, is the scarcity of time, people and money for early stage startups. It is critical to have forward motion.

Position yourself as the market leader in your niche by making a strong claim.
Positioning is extremely important when it comes to customers making purchase decisions.

For example, when I mention Lamborghini, you immediately recall certain attributes in your head, like “expensive”, “luxurious”, “high-end”, “sportscars” and “rare”.

Pragmatists want to know where you stand with respect to your competition (as they’re only interested in established brands), but you’re the high tech newbie, and there might not even be direct competition, so what can you do?

You define your competition yourself.

When you contrast yourself with a market alternative (the traditional way of doing things) and a product alternative (a competitor, who uses the same technology, but in a different industry), you can easily position yourself as the leader in the new, combined field.

For example, Dropbox could’ve positioned itself by saying: “For private PC users, who are sick of carrying files from one PC to the next via USB stick, we offer a hardware-free file syncing solution. Our service makes your files available on any device with an internet connection, just like YouTube does with video, but with any type of file you choose.”

These 2 sentences are all it takes to give you a powerful position – in fact, it shouldn’t take more than 2 sentences to make it clear to everyone in your target niche.

This claim will allow you to focus exactly on your initial niche and eventually take the majority of the market share there, so you can then expand and dominate the rest of the market as well.

If you want to learn more about it, Simon Sinek integrates it well into his TED talk. He says:

Mr. Moore’s blueprint works, dozens of companies have proven it over the years – most recently Uber, who initially targeted the techy hipsters at the SXSW conference, video drones, who are becoming a standard tool for shooting video and of course Facebook, who collected college campus after college campus in his user base until everyone wanted to get an account.