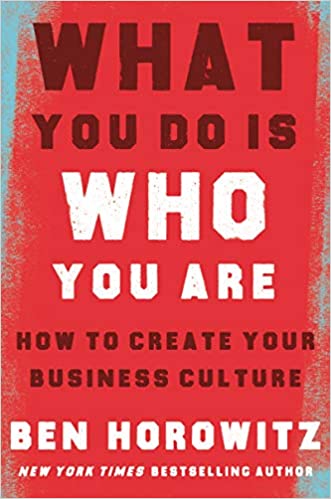 This book was a timely opportunity to understand the intersection of culture and action.

Ben Horowitz is the cofounder and general partner of Andreessen Horowitz, a Silicon Valley-based venture capital firm that invests in entrepreneurs building the next generation of leading technology companies. The firm’s investments include Airbnb, GitHub, Facebook, Pinterest, and Twitter. Previously, he was cofounder and CEO of Opsware, formerly Loudcloud, which was acquired by Hewlett-Packard for $1.6 billion in 2007. Horowitz writes about his experiences and insights from his career as a computer science student, software engineer, cofounder, CEO, and investor in a blog that is read by nearly 10 million people.

Here he writes about culture; specifically company culture. The book combines lessons both from history and from modern organizational research to give advice aimed at leaders that want to proactively design culture.

He starts the book with language similar to the Netflix culture deck:

Is culture dogs at work and yoga in the break room? No, those are perks. Is it your corporate values? No, those are aspirations? Is it the personality and the priorities of the CEO? That helps shape the culture, but is far from the thing itself.

I love Ben Horowitz’s brash style and direct advice, but the selection of non-traditional characters felt forced. It was hard for me to connect with characters more defined by their crimes than successes. While historical villians may present some lessons, I think the pool of case studies is large enough to include moral leaders, even if you force yourself to exclude white europeans, which is very Zeitgesity these days.

Studying gang dynamics for leadership lessons, has a Freakonimics like novelty to it, but I’m looking for impact over novelty.

Samuari and the difference between culture, values and virtues?

One case study I did enjoy was the focus on Samurai, specifially the focus on virtues over values. The samurai’s bushido code—"the way of the warrior"—lasted nearly 700 years and still infuses Japanese culture. It endured because it established clear requirements for behavior bounded by loyalty, respect, and sincerity and enforced them with severe consequences for misbehavior.

Bushido isn’t a set of principles, but a set of practices: it’s about actions, not beliefs. Other samurai virtues included honor, politeness, and sincerity: three complementary qualities that translate well to business.

He makes an important point that culture isn’t the same as values – values are more like aspirations, while culture has to mean something in practice. Virtues are what you do. Values are what you believe.

He hits a key point with his perspective on what matters.

Your own perspective on the culture is not that relevant. Your view or your executive team’s view of your culture is rarely what your employees experience…The relevant question is, what must employees do to survive and succeed in your organization? What behaviors get them included in, or excluded from, the power base? What gets them ahead?

Then, he emphasizes how important conveying context to a workforce is:

Above all else, employees want to know that they matter, they’re making a difference, there’s meaningful work to be done, and they’re moving the bigger picture forward. Without this, it’s impossible to get people to care.

If people don’t care, then it is just their own ability to succeed in the culture. If a culture can’t make quick decisions or has a void in leadership, it becomes defined by indifference.

As a manager, the worst thing you can do is undermine decisions made above you. This creates cultural chaos, makes your team feel marginalized and powerless, and end result is apathy and attrition. If you disagree with those above you you need to leave before you start complaiing about them.

The problem is there is a lack of courage in most business leadership. Telling the truth isn’t natural. It requires courage. The easy thing to do is to tell someone what they want to hear.

The way you get to the place of being able to articulate a decision you might not agree with is by asking why. It’s your job to understand the reasoning behind a decision, otherwise you have failed your team.

You might not convince everyone you’re right. But everyone must feel heard and that you’ve acknowledged their concerns. This is the path towards disagreeing and committing.

Culture matters and leaders must be intentional. I also take his point that leadership lessons can come from non-traditional sources.

No matter what your culture is, your new hires should embody them: always hire people well suited to your culture. Second, make sure the virtues you choose are actionable. Like the samurai’s bushido code, they should be things you do, not just idealized beliefs. Third, while the virtues don’t have to be totally unique, they should at least distinguish your company from the competition.

This all requires trust. If your employees don’t trust both each other and you, a distinct culture won’t form. They should trust you so much that you can deliver bad news when necessary – for instance, when there will be layoffs – and still retain their respect. If they don’t, bad situations will have a habit of just getting worse and worse.

Ben Horowitz uses Abraham Lincoln’s Gettysburg Address to show how being direct can be so effective if done with context. With that speech, Lincoln managed to imbue the American Civil War with new meaning by explaining why so many soldiers had died at Gettysburg. He acknowledged the cost of the war, but also explained why he believed in its significance – a model for any CEO.

Bad news goes both ways, of course, and he makes the point that you should foster a culture in which you always know the worst of what’s going on. Every organization of significant size is home to lots and lots of problems: your job is to know about as many of them as possible. Your employees should therefore trust you enough that they can come forward with issues, and know that you’ll be positive and constructive about them when they do.