I enjoyed this book and would recommend it to folks like me trying to connect their vocation to meaning, but I had to get past a rough start. "It’s not the chocolate, it’s the chocolate." is the banner quote of this book -- a book I was seeking to help me understand the intersection of corporate life and meaning. The quote means his company, Askinosie Chocolate, isn’t just about making chocolate, or making money. Instead, Askinosie said, the company is about the people — the employees, the cocoa bean farmers and the customers. And since those people help and are helped by the business, it is about the chocolate. I find this all a bit circular, but the author is pretty pleased about it.

I also struggle to appreciate high margin niche businesses. Ever since reading, Charles Murray's Coming Apart: The State of White America, 1960-2010, I've been concerned about the separation of supply chains between social classes. Here in New York, my protestant frugal background contrasts with the desire to support local businesses -- business that caters to the 1% who pay 4x for a product. Wealth can afford to subsidize the inefficiency of the business because of some greater purpose. I struggle with the dichotomy between my love of quality and skepticism of the dissatisfaction with the mass production and subsequent walmartification of our modern economy that provides huge benefits to consumers. That said, I've been known to buy $10 chocolate bars -- I'm in love with SVENSKA KAKAOBOLAGET.

I also was a bit put off by the author's attempt to discuss specific faith in a pluralistic context in order to appeal to a mass audience, which seemed more like Spinozism than his professed Christianity. He had this annoying habit of following up each mention of his faith, with a litany of options available to other faiths that could result in the same value.

These struggles aside, I learned a lot from this book and gained a deep appreciation for the wisdom, person and vision of Shawn Askinosie. In the end, I can say I enjoyed and will get a lot of mileage out of this book.

First, this is because he has clearly connected with the pain in his life. Case in point: the one question he asks entrepreneurs: "Where is your heart broken?" Because of this openness, he writes with a passion for empowering others and expertise in the areas of business, introspection and soul care from more than 10 years of experience running his own chocolate business.

The book begins with a story, immediately transporting the reader into what 12 year old Askinosie thought and felt during the most traumatic event of his life. "My father’s death was, and remains, my greatest sorrow," he writes. He shares how his father’s death — and the loss he felt following — shaped who he is today, even down to the way he does business. Askinosie lays the foundation of his book on this moment in his life, and how this continues to inspire him to serve others and take times of darkness and confusion and turn them to joy.

In 1999, I hit a roadblock. The stress and intensity of my work came to feel overwhelming. I became desperate to find a new path, though I had no idea what that might be

He knew he was being called to something else, but for years he ached to discover what it was. In the meantime, he began serving at a local palliative care department. It was here that he discovered his deep and passionate love for serving others and, moreover, caring for others more than he cared or thought about himself. He continued to serve as a lawyer, never waning in his renowned thoroughness, but entered a season of anxiety and depression, because he knew he was no longer working where he felt called. But he didn’t know where he felt called.

But he had an insight. In serving others he realized that, although he might have helped the patients, the patients helped him more. He highlights this as was one of the first times Askinosie thought of someone else besides himself and this was the nudge he needed.

During this season, he spent time praying and seeking, ultimately, pushing himself to identify what this calling was. This only made matters worse. Through this, he learned that sometimes, all that can be done is to wait and learn more about yourself — a difficult discipline to acquire.

"My exploration of my deepest sorrow allowed me to uncover passions I didn’t know I had," he writes. "Ultimately, it led me to the discovery of my vocation, and to the creation of Askinosie Chocolate."

His subsequent journey brought clarity to his life and opened his heart to leaving criminal law and choose chocolate as his vocation--with service to others as the center of his business.

The purpose of his book is to tell his story of how he found and now lives his vocation. His openness and vulnerability disarmed my inner cry of the unfair privilege that allows someone to quit their bill-paying job, and pursue a passion in a way that disarmed my defensiveness--leaving me open and available to his message. Yes, I still feel trapped in a corporate track, and I justify my work as meaningful and important.

His message is that to find your vocation, you must determine "what’s the intersection of your talent, what the world needs and what your skill set is." His chosen vocation is all about the connection to humanity, he said.

And he does great good. He has started programs for elementary, high school and college students. One of the programs, Chocolate University, takes students to cocoa bean farms in Tanzania. But his major impact is in the developing world. His company has a profit-sharing arrangement with cocoa farmers, providing them a far better living than they would make dealing with other companies. 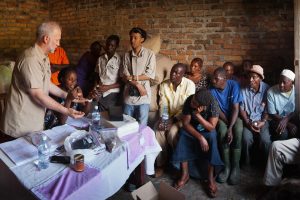 For example, one of his recent projects is feeding children in Tanzania. Askinosie Chocolate sells rice from a region affected by malnutrition, and all the proceeds go back to the area to feed students.

He brings all the discussions back to his benefit, showing a good understanding of his motivations and some deep wisdom: "This business is a motor to help people, but that’s not what it really is," Askinosie said. "The secret is, I’m the one that’s helped. The business is a connection to humanity."

So the heart of the book is really centered in feeding one’s soul. Shawn Askinosie shares personal stories that provide readers a glimpse into what it’s like to not only own a chocolate business, but what it means to run a business with a soul. The whole thing reads like a letter from a beloved, wise mentor.

The book is arranged in six chapters, each chronicling Askinosie’s journey into finding his own calling into meaningful work, and three appendices: the first, a breakdown of the supply chain cycle of what cocoa farmers make, the second, the Askinosie bean purchase history, that includes a comprehensive chart of the company’s purchase history from 2006-2017, and the third, Askinosie’s personal "Rule of Life" that he submitted to the Trappist Brothers in his own effort to become a Family Brother at the monastery.

An advocate for doing what you love well, Askinosie argues that there is inherent and immeasurable meaning in creating what you were called to create and doing it to the utmost of your ability.

Though the book abounds in steps toward spiritual healing and good soul-care, Askinosie does not merely wax philosophic. Each chapter concludes with several exercises, some focused on vocation vision, some focused on inner reflection, and others with ideas to improve your business. They believe Askinosie Chocolates is, at its core, a small business; and they intend to keep it that way.

Net, net this book is a good read for anyone who longs to serve the world with their ideas. In particular, if you find yourself constantly filled with entrepreneurial thoughts and eagerness, this book is for you. In Askinosie’s own words

This book is for entrepreneurs at heart or in practice – or both. It is for those who are searching for their own personal meaning in their work, and seeking to transform that meaning into a vocation. Whether you’re beginning a new venture or want to infuse your current one with dedicated purpose, my hope is that my experiences, and the deep and enduring lessons I’ve learned from them, will help you find your own business vocation.

One Reply to “Meaningful Work”