CrossFit is still a new and growing sport which is misunderstood by many to be a place only for the elite. Rich Froning brakes down the barriers between the most elite tier of the sport and the most casual reader as he lays out his life and worldview in an amazingly fast and engaging read. His book has three main themes constantly woven together in an interesting narrative: (1) explaining CrossFit, (2) telling us about his life and (3) sharing with us insights about his faith and philosophy.

It is rare to find such an honest and optimistic account from someone with so much fame and talent. While his readership will most strongly come from CrossFit fans, he packs some great lessons for all of us that have broad application well beyond CrossFit. Like his fitness training regimen, he doesn’t hold back or shy away from the key principles that guide his actions and frame his world. All this results in an intimate portrait of his strengths, weaknesses and casual thoughts. Part of what makes this narrative so engaging is the casual style he engages you with as he takes you through the CrossFit victories and defeats that define his nascent career. You have to keep reminding yourself that he is winning first place (consistently now) among roughly 100,000 athletes. While he takes you into the action, you are motivated by the thought that you too could compete at his level if you just were willing to work hard and get your mental house in order. Unfortunately, reality reminds you that Rich has something very rare that remains incredible from a fitness perspective. You are aware of the power of context in his life — he gives due credit to his friends and family for providing rare and outstanding counsel, love and wisdom.

Out of the roughly 30 books I’ve read this year, I have to say I’ve really enjoyed reading this one the most — both my wife and I read it in about a day as we fought for the book. Most modern biography seems to make the subject more inaccessible as details of their life unfold. Here, Rich has done the opposite, by the end of the book you know that you would be instantly comfortable around him and are inspired to make your life look a little more like his.

CS Lewis said we read to know that we are not alone. I’ve always read to find out how the world works primarily so that when I’m with others, I can clarify the world’s interactions. This is probably because I know that you have to understand a system to succeed inside and, as a parent of four children, I’m also committed to making the future as good as possible for them, in addition to loving my Creator and wanting to impact and preserve the world for Him. In short, I’m more motivated than lonely, though I am a little of both at different times. Whatever the reason, I’ve got a deep fascination with finding out how the world works and building an accurate philosophy of history. This book seemed to fit that bill and it does deliver the author’s opinion, cynical and misguided as it may be.

Clearly, George Packer is a well established member of the anti-establishment and that view determines the polarization of his pen as he sketches a series of lives and their experiences with what he terms the unwinding. He defines the unwinding as the change in American society present in the last 40 years as we have transitioned from a manufacturing-based and more localized economy to our present state. The author describes this world for us as a place where the institutions of government have failed us because they have been taken over by special interests and the only guardians of hope are the iconoclast organizers, journalists and activists determined to fight the system. However, any time these activists get to work, they better not get big because they risk becoming part of the establishment, which creates a strange tension for me: while you can’t trust any private institution to act responsibly, he seems to have a blind trust in the government to regulate and level the playing field. Through a set of engaging and short biographical vignettes, he builds the case for increased regulation to protect the public from our failed institutions. He puts a name and a history on what otherwise might be another name who loses their home. He portrays hapless families used by the big banks to take away their home, and to be content there, but to take away their dignity, their health and even their sanity in an insatiable act of greed. His message is clear — a disease has taken over our country and it is in general the establishment and in particular republican party (wholly owned by big business) and the democrats of the permanent political class. But isn’t he missing something here? Aren’t we all culpable when it comes to greed? I know it is obvious, but I can’t escape the fact that no one was forced to sign any of the mortgage papers that provided the legal justification to reclaim their homes after they repeatedly failed to make payments.

While he exalts the value of the individual against the institution, even his heroes come off a bit weak. Dean Price, Tammy and Peter Theil all get their platform while some are put before us for outright scorn or tabloid entertainment: Breitbart, Gingrich, and Oprah. Yes, all the biographies are interesting, but besides their entertainment value many failed to fall into the larger narrative in any meaningful way.

Despite my overall disagreement with his diagnosis, I greatly enjoyed this read and recommend it to my friends. He also exposes you to inside the system and does give some very interesting perspectives. The way he tells it in biographical sketches made the book very compelling and did teach me a lot about the world and the way he set up his framework forced me to ask some very interesting questions related to how I think the world fits together.

I have always believed in compensating for my lack of experience through leveraging my modeling background. With the right tools, I can hone my intuition and help my lack of experience through careful planning. I also need tools to communicate to my family, friends and any contractors my exact plans. In the past I had built small 3d sections of my yard through setting up a laser level on a high point and breaking my yard into a grid and carefully measuring with a level. The results were a 3d point cloud that I wrangled into (formerly) Google SketchUp.

My latest plans call for a shed and potentially a kitchen and house expansion. This requires a full 3d model of my entire yard and I don’t have anything close to the time required to build separate grids and compile them into a patchwork. Additionally, a key principle of mine is to match the fidelity required and all I needed was a rough sandbox for my yard — for the purposes of design only. This means I could be up to 5-10 off in elevation and still get what I want.

Two years ago, I purchased the GIS data for Alexandria, and through Matlab mapping toolbox I was able to pull up the following contours of my yard.

I couldn’t think of any immediate way to get these lines into dxf or some vector format readable by SketchUp, but I was able to retrace the lines easily enough (2 hours of work, but I wanted clean splines anyway) when I combined the 2′ contour data with the following survey of my house.

The problem was that it produced a terrible approximation that didn’t look like my yard. I ended up trying to approximate the yard through some basic shapes, but I ended up with this mess.

The next try was an attempt to get the fidelity right and rely on intuition. I took a hose out and tried to keep it flat. I learned that the city plot was a lot more accurate than I originally thought. Oh well, but now I had a better model to work with. I used Autodesk Sketch on the ipad and made up the contours with my finger. Than I scanned them into visio to get some good splines.

Here is the result:

With some rough pulling, I have something much closer to what I’m expecting:

All together this gave me exactly what I wanted, a solid 3d model that enabled me to play with my yard and start planning my shed. 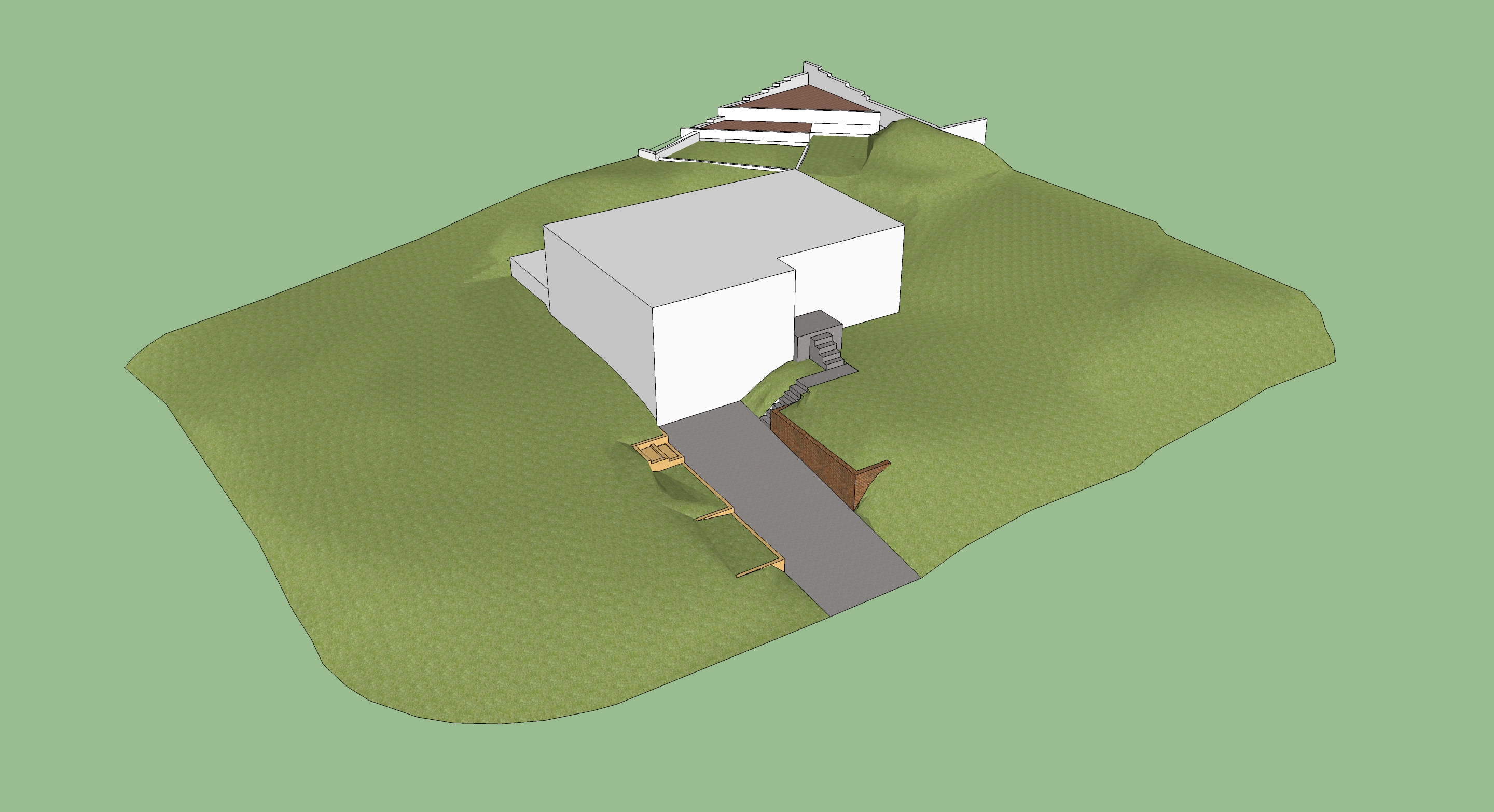 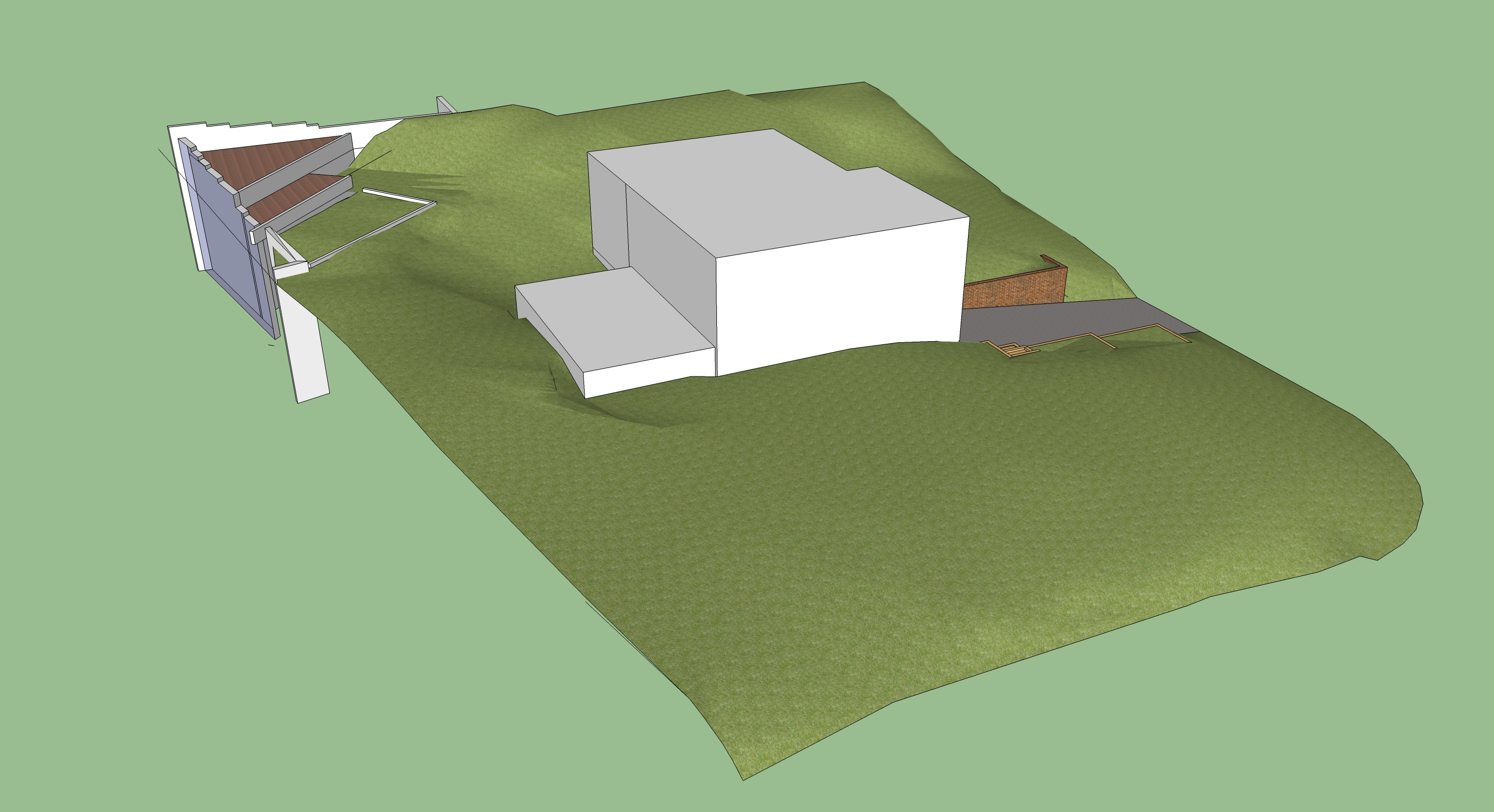